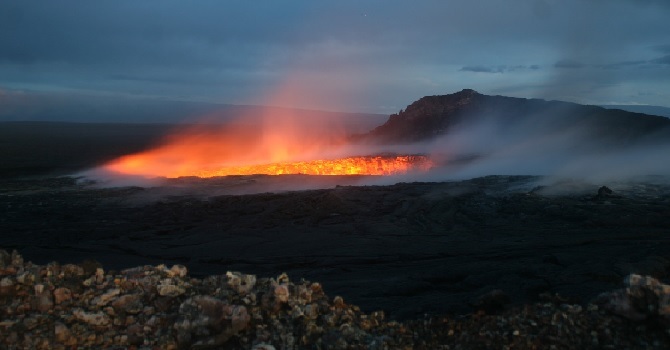 Recently, we have seen dramatic pictures from the Big Island in Hawaii with the eruption of the Kilauea Volcano.  An unceasing flow of lava has destroyed hundreds of structures.  It also erased the island’s largest lake.  When the lava reached the lake, its heat evaporated the lake water was completely gone.   There may be more destruction to come.  According to a June 5 article in Forbes magazine, earthquake activity has been intensifying in recent days.  There were 5.5 and 5.6 magnitude tremors on Monday and Tuesday of this past week.  Though there is little fear of tsunamis, roads and buildings in the National Volcanic Park have been damaged by the quakes.

News reports have been using the term “apocalyptic” to describe this event.   Britain’s Daily Express ran this headline May 6 – “Hawaii volcano warning: Fears grow over flight ban amid apocalyptic ‘hell-like’ eruptions.”   Britain’s Daily Star’s headlines the same day read “’Apocalyptic’ lava engulfs homes as Hawaii volcano continues to erupt.”  Then Metro News, also out of England, ran this headline on May 14 – “Fears of apocalyptic eruptions around the ‘Ring of Fire’ in wake of Hawaii volcano.”  Is the Hawaii eruption a sign of the apocalypse?                  To answer that, we need to define apocalypse.  To most people, apocalypse describes a nearly planet killing event where the vast majority of people die.  Survivors have to figure out living in the post-apocalyptic world.  But this understanding of apocalypse is relatively recent in history.  The word apocalypse comes from Greek and referred to an “unveiling” of some hidden knowledge especially about future events.  Apocalyptic literature spread in Jewish and Christian circles from about 200 BC to AD 150.  Many showed great interest in it because their communities experienced great upheaval and persecution.                     But there was one writing that stood above them all.  It is the last book of the New Testament.    It’s entitled the “Apocalypse” in Greek or the “Revelation” in English.  It does talk about the end of the world.  It contains planet disturbing visions and a movement towards an actual end of history.   Yet this is not some random event.  Revelation’s author portrays history in the hands of God.  At a time He chooses, He will oversee the last days.   But the author states his purpose the book’s first words – “The Revelation of Jesus Christ.”   To get the Bible’s complete portrayal of Jesus, one must read Revelation.  It portrays him very differently than in the Gospels.  In Revelation, Jesus is the Mighty King; the Lamb who was slain and the glorious Son of God.  Revelation alerts readers to the choice they need to make regarding Jesus Christ – with or against him?

But back to our original question.  Does Hawaii’s volcanic eruption signal the apocalypse?  No and Yes.   Jesus said “There will be wars, famines and earthquakes in various places.  Yet these are the beginning of birth pains.”  An individual war or volcanic eruption does not certainly indicate the arrival of the apocalypse.  But they do remind us that the world won’t go on forever.  Or it won’t stay the same forever.  We see this clearly in residents of the big island who now look at burned up houses and destroyed land.  Life can change in a moment.  Revelation teaches that a time will come when the world will be changed in a moment.  Then all people will meet the all powerful Christ.  Yet we don’t’ have to fear.  Knowing Christ ensures He will see us through whatever we face in life and whatever the apocalypse brings.  I pray you know Him or find out more about Him.