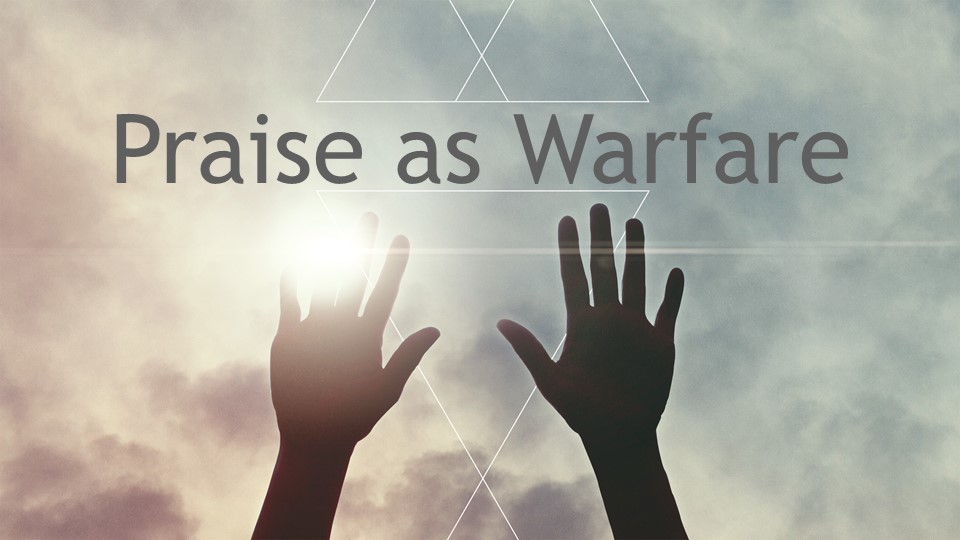 We are told in the Bible that we are engaged in warfare. Ephesians 6 says that we are not fighting against flesh and blood but against spiritual powers. The question then is, how do we engage in this kind of warfare? Many authors and theologians have studied this through the years. There is intercessory prayer, and the well-known passage on the Armor of God. Today though, I want to reflect on the purpose of praise as a weapon in spiritual warfare.

In 2 Chronicles 20 we find the story of King Jehoshaphat, the fourth king of Judah. He hears that there is an army coming against Judah, and so he inquires of the Lord who sends the prophet Jahaziel to him. Jahaziel tells the king that the Lord will give the battle to Judah, and that they will not need to fight.

Jehoshaphat praises God, and when they go out against the enemy the king does something ludicrous, he puts singers in front of his army! You would think this would be a poor battle strategy, unless you wanted fodder for the enemy soldiers. But he placed stock in these men as warriors, and off they went singing praises. As they sang praises to God, He fought for them, and they were victorious without even lifting a sword. They weren’t calling down fire from heaven or trying to invoke God’s wrath upon their enemies. Rather, they sang, “Give thanks to the Lord, His love endures forever”.

There are other examples of praise used in warfare. Praise often accompanies a move of God. Paul and Silas, as they sat in prison singing praise to God, were released from their chains amidst an earthquake! When the walls of Jericho came down, it was a trumpet blast that the Lord commanded to work. Psalm 118:19-20 says, “Open to me the gates of victory; I will enter by them and praise the Lord. This is the gate of the Lord; the victors shall make their entry through it.” The way to victory is through praise!

For Jehoshaphat, the warfare was physical. It was against another flesh and blood army. For us, it is spiritual. We battle against the forces of darkness, against the evil one’s desire to tear apart the church. As worshippers not only are we singing or playing instruments, but we are engaging in a type of spiritual battle. Through our praises, the Lord fights for us. Therefore, we must be prepared for this kind of warfare. The good news is, we are not alone. The words of God through Jahaziel ring true today, “Do not be afraid or discouraged because of this vast army. For the battle is not yours, but God’s.”